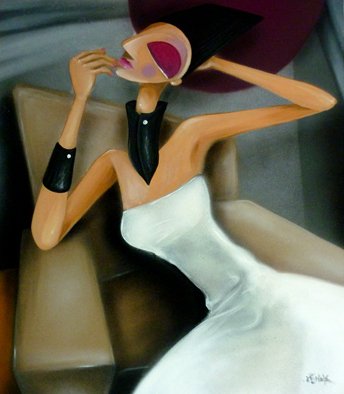 She appeared on the scene with the confidence that only great divas possess and with the determination of those who intend to leave an indelible image of themselves in the memories of those who met her.

Brigitte does not correspond to the classical and collective canons of "beauty": the imposing and arched nose, the huge languid eye and the curvy hips make her "unique" and interesting, capable of capturing the viewer's attention and inviting him to indulge in observation of the painting in search of details that reveal its personality. If anything, Madame B is an icon of style and femininity, a bewitching seductress who reveals herself with wise and measured mastery, revealing, from work to work, a multifaceted and elusive character. Brigitte always appears at ease in the different situations in which she is depicted, she maintains her composure even while observing us, imperturbable and distant, languidly lying on a bed or on an armchair, reminding us of the most intense images of Valentina drawn by Guido Crepax and Milo Manara. But it is in less intimate contexts, such as bars or lounges, presumably crowded, that she fully shows her sensuality, proud and aware: the refined clothes that highlight the thin neck and shoulders, the wide wide-brimmed hats that in part they hide her face, the refinement of the jewels and make-up reveal the care with which she prepared for the appointment, the attention with which she chose the side of herself she intended to show. The taste for details, in particular for accessories, for the centrality and characterization of the female figure and, above all, for the dynamism impressed on the composition by oblique lines of force, refer to the work of a painter who has dedicated a large part of her work to female fascination: Tamara De Lempicka.

Brigitte perhaps does not have the physicality of the Polish artist's women but takes up their unnatural pose, the look now distracted now mischievous, the refinement and, more than anything else, modernity, that is the desire to be portrayed as an emblem of this space and this time. The communicative strength of the character lies precisely in his contemporaneity, however ideal.

Madame B seems to want to guide us in the game of seduction to reveal its charm; sitting at the table, in front of a glass of wine, she silently observes us wondering, perhaps, if we will abandon ourselves with the imagination to the beauty of her world of bright and gaudy colors, grasping its most playful and superficial aspect, or if we will choose to grasp those often unspoken truths that belong as much to his world as to ours: the fragility hidden behind the veil of vanity, the incessant search for the other and the fear of his judgment, the melancholy and yearning loneliness of waiting moments.